Below is a checklist for executive sessions, hearings, and public meetings conducted by Committees to help ensure access and participation of persons with disabilities.

____ Have accommodations been requested? Examples include:

____ Interpreter (needs to be requested 1 week in advance)

____ Large print of all materials

____ Is the room accessible for attendees and witnesses who use wheelchairs, walkers, scooters, etc? Do not place persons in wheelchairs, or those who use walkers or service animals on the fringes or in a “special area.”

____ Is there reserved seating in the front for someone who has low vision or who is deaf to see the real‐time captioning or the interpreter? 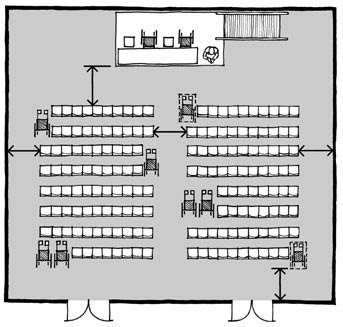